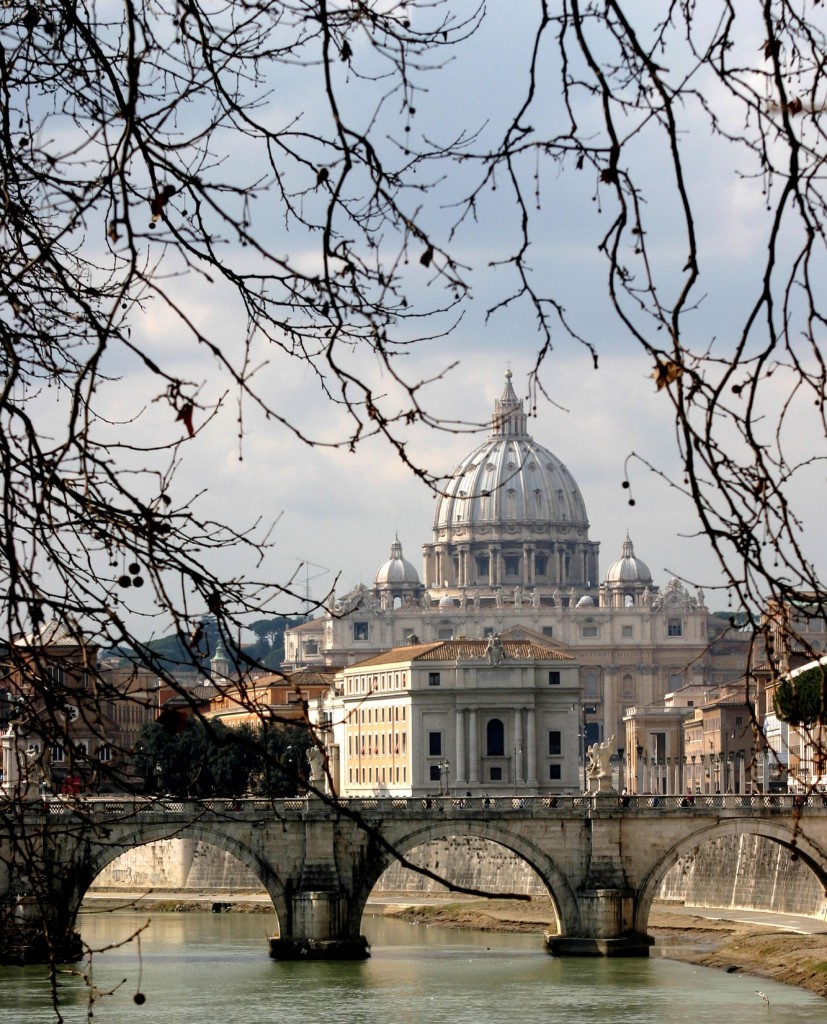 You know you’re in the middle of a memorable vacation when your afternoon includes an accidental audience with the pope.

Technically “audience with the pope” may be too intimate of a description – to be precise, I was one of the thousands who were crowded into the piazza in front of St. Peter’s Basilica, and His Holiness was a few stories up, offering his Sunday blessing from the window of his Vatican study.

But the fact that I could absentmindedly amble across this gathering at the moment that the cannon fired to signal the appearance of Pope John Paul II is merely one example of the many splendors and surprises that await one in Rome.

Legendarily founded by the orphaned twin sons of the god of war and a former vestal virgin, Rome holds millenia of treasure in store for those who visit.

From the magnificence of the Vatican Museums to the decaying wonders of the Roman Forum, one can be forgiven for confusing a walk through “the Eternal City” with following a path through the very history of human civilization.

According to tradition, Rome came into existence April 21, 753 BC, when Romulus killed his twin brother, Remus, and founded a city named after himself. (Though many now take this story with the proverbial grain of salt, evidence unearthed by archaeologists confirms that the city does, indeed, date to approximately 6 or 7 centuries before the birth of Christ.)

Founded in the aftermath of a legendary murder, Rome has not been a stranger to bloodshed in the intervening centuries.

St. Peter is believed to have been martyred on the spot where the basilica that bears his name now stands, the Colosseum was the site of world-renowned blood sports, and of course Julius Caesar met his untimely (to him, at least) demise in Rome on a certain March 15 more than 2,000 years ago.

On a larger scale, the city has endured a number of civil wars, invasions and sackings. Various rulers (kings, emperors, popes and others) laid their claims upon the city through the millenia, and as both secular and spiritual influence rose and waned, Rome remained a focal point of art, architecture, politics and power.

As late as the 1970s, radical groups including the Brigate Rossa (Red Brigade) conducted terrorist campaigns in the city, including the murder of a former prime minister.

But through it all – much like the shattered remnants of Rome’s famous ruins – the city itself has endured, forging a unique beauty all the more luminescent for the terrors and tragedies it has survived.

Though Rome has an undeniably violent history, it is also home to some of the world’s most awe-inspiring architecture and breathtaking works of art.

(And, in the “good news” category for those who would like to view these treasures in person, sightings of invading Visigoths and black-shirted fascists are – with the exception of the occasional unfortunate costume party selection – nonexistent these days. Though being sideswiped by a Vespa is a fate that still awaits the unaware pedestrian who attempts to cross one of Rome’s stunningly congested streets without looking both ways once or twice.)

And while no one would expect all of Rome’s great artists to have been particularly devout, much of the art in this Vatican-influenced city is (not surprisingly) religious in nature.

Visiting some of these works – for example, Michaelangelo’s magnificent paintings on the ceiling of the Sistine Chapel, which are on almost every Rome-goer’s “must-see list” – will likely require a wait in line and the purchase of a ticket. (Touring the Vatican Museums, which includes the Sistine Chapel, costs 12 euro per person – and if you arrive at the museums’ 8 a.m. opening time, be prepared to be at the back of a line that can literally stretch for miles.)

However, other works worthy of a day’s viewing can be seen for free – and may often be done so with little or no wait.

One such example is Bernini’s exquisite sculpture of “The Ecstasy of St. Teresa,” which stands in a transept to the left of the main altar in the relatively tiny, out-of-the-way church of Santa Maria della Vittoria (St. Mary of the Victory).

[Note: Because this sculpture plays a significant role in Dan Brown’s “Angels and Demons,” demand to see it has increased in recent years; still, its off-the-beaten path location offers some respite from the tourist throngs.]

For those interested more in structures than sculptures, Rome’s architectural enticements range from the pre-Christian ruins of the Roman Forum to the imposing Castel Sant’ Angelo to the grandiosity of St. Peter’s Basilica and its Bernini-designed piazza (any of which could occupy the design- minded for hours if not days).

Rome is home to hundreds of churches, chapels, oratories and other destinations of religious significance. Add to this mix a wealth of secular wonders, the hustle and bustle of a modern metropolis, and an array of restaurants that will cause you to beg forgiveness for ever entering an Olive Garden, and it won’t take long for you to realize why travelers have been trekking to Italy’s Eternal City for generations.

Given its many artistic, architectural and gastronomic delights, what may be most surprising about Rome is that its most transcendent aspect can’t be seen, touched or tasted. In 1337, the poet Petrarch wrote that “Nowhere is Rome less well known than in Rome.” This, of course, may be said of any city: That only a foreigner can truly grasp its significance, can impartially place its wonders in the proper perspective.

But when in Rome, the traveler may also find that while he is evaluating and interpreting the city, the city is looking just as intently right back at him.

Any American who is satisfied with his nation’s grand history and ability to endure would do well to meditate upon these thoughts while sitting amid the decaying ruins of the empire that once ruled the world.

Anyone who is certain that all answers to society’s ills lie within the church should walk the perimeter of St. Peter’s Square in the moonlight, careful not to stumble over the men and women who sleep in doorways and huddle over heating grates not 100 meters from the most magnificent church on Earth.

And any patron of the arts who knows that in expressions of beauty lie the antidote to hatred can surely find no better place than Rome to contemplate the atrocities that this eternal city of breathtaking beauty has seen.

Regardless of one’s personal philosophy, Rome likely contains both the seeds of this perspective and those of its antithesis. Rome willingly offers up its beauty, but also requires that the visitor see its scars.

It provokes and challenges, inspires and surprises. Rome reinforces one’s most fleeting fancies and attacks one’s most dearly held convictions.

In the end, Rome rewards its visitors. Whether one chooses to call this gift enlightenment, awareness, affirmation or any other name says as much about the traveler as it does about the city – which, when one thinks about it, may be what going to Rome is really all about after all.

[This travel feature originally appeared in The Citizen, the official newspaper of U.S. Army Garrison Stuttgart.]